Renters’ Renovations: The Tenants Making a House Their Home

With the rising cost of house prices making the prospect of owning a home for many an increasingly distant sight on the horizon, renting has become a far more common housing option when compared to generations past. Referred to as ‘generation rent’, many young people today are finding it difficult to make their first step onto the property ladder, faced with the prospect of remaining long-term leasers than of becoming first-time buyers.

With this in mind, here at I Want Wallpaper, we wanted to find out the ways in which renters are dealing with living in a house that isn’t their own. We’ve surveyed 2,000 renters aged 18-34 to take a look into renters’ renovations and the steps tenants are taking to make a rented house feel like their home.

How many renters have made renovations to a rented property at their own expense? 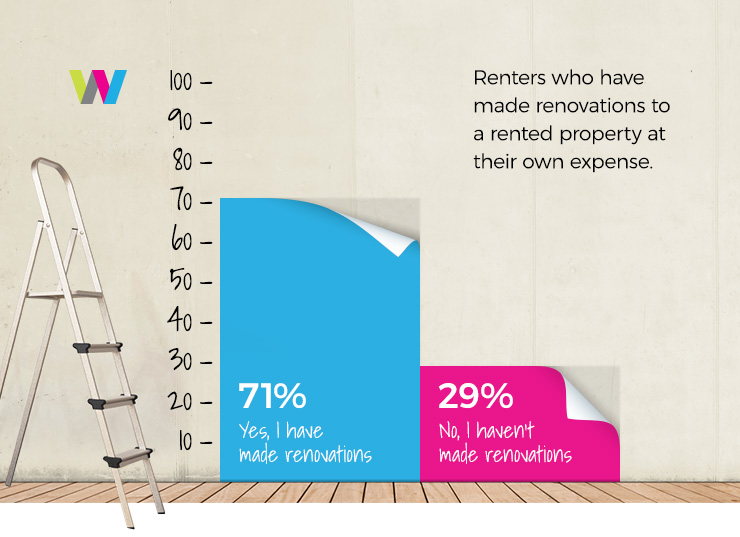 Out of the 2,000 renters we surveyed, a massive 71% told us they’d spent their own money renovating and doing up their rented property, leaving just 29% of renters making no changes out of their own pocket.

With renting ever on the rise and longer-term leases more attainable than a mortgage for many, it’s easy to see why tenants would want to take steps to make their homes feel more like their own.

What is the average spend on renters’ renovations over a three-year lease? 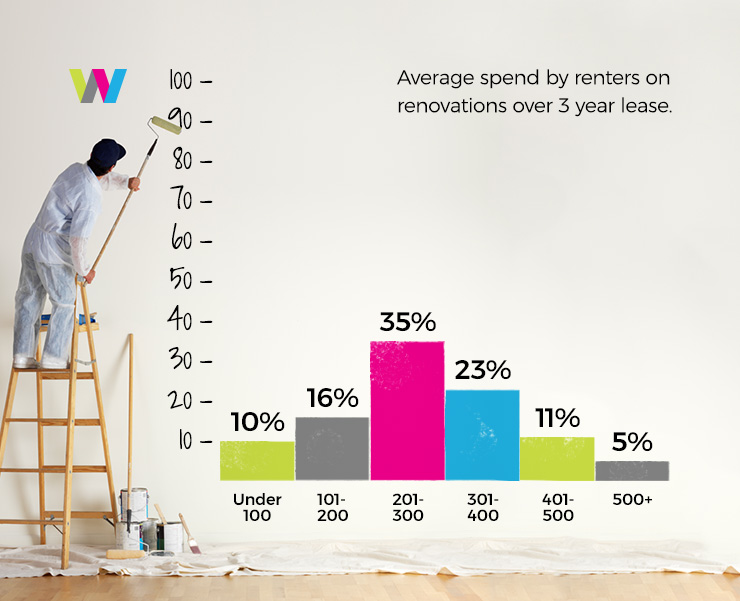 To get an idea of how much exactly these renovations are costing the renter, we asked our 2,000 survey participants how much of their own money they had spent throughout the duration of a three-year lease. Our results show us that, at 35%, the average spend by renters was between £201- £300 over three years. 5% of renters had spent £500 or more on renovations during that time and only 10% of renters had spent under £100 of their own money.

With this cost added to the price of monthly rent and bills tenants pay, it’s apparent that renters are investing a lot of their own money into rental properties. For the renters, these renovations can feel like a necessary cost that allows them to make their rented house feel like home. And, while some landlords may be hesitant to agree to tenants’ touch-ups, this trend can, in many respects, be to their benefit too.

Patricia Barber, Chair of the Association of Independent Inventory Clerks (AIIC) has stated of this trend: “It’s clear that tenants are increasingly willing to spend their own money on improving their rental property and this is certainly something landlords should think about… we’re seeing more long-term tenants and they’re clearly committed to living in a higher standard of property. Landlords who cautiously allow tenants to put their own stamp on a property could benefit from a lower turnover of tenants and an improved and well-maintained property at the end of the contract.”

Which regions in England are spending the most?

When we took a look into the average spend of tenants by region, our results showed us that renters in the West Midlands are spending the most over a three-year period, with an average spend of £450. 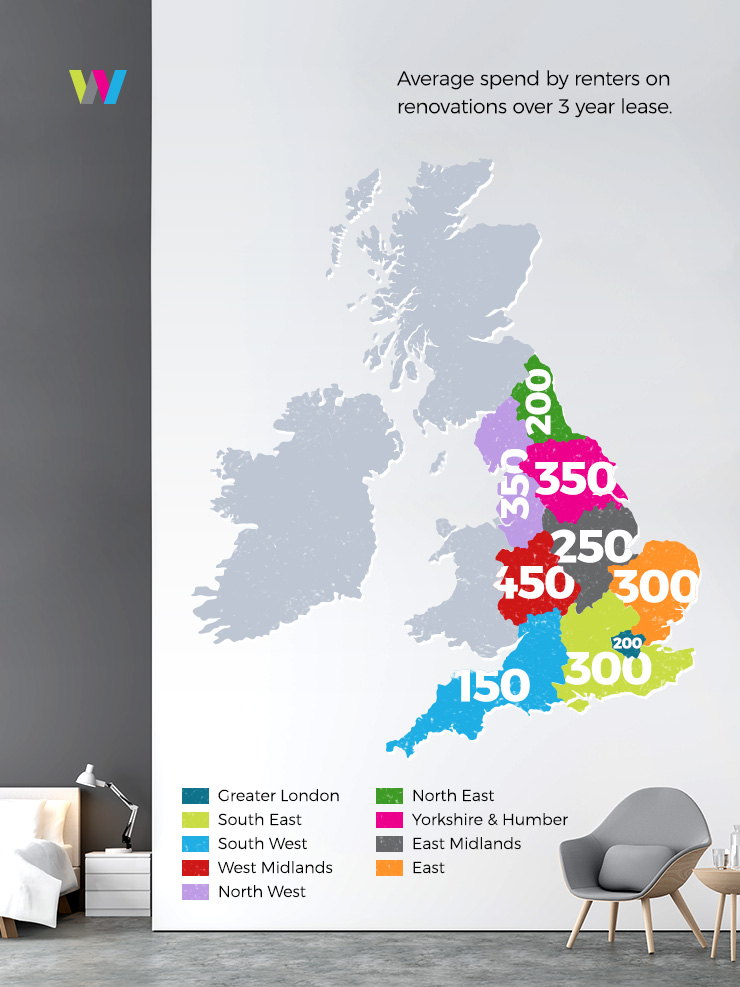 And which are the most common renovations made to rented properties?

So, we’ve established which areas are spending the most and how much they’re spending, but once we looked at the why and the where, we also wanted to know how tenants go about making their renovations to their rental property.

Our survey results showed us that the most common change 95% of our tenants made was changing lightbulbs, with 81% of those changing to energy efficient bulbs – a common way to reduce the monthly electric bill. As expected, some of the other most common changes we found tenants are making are simple, non-permanent renovations and changes to home decor. A huge 93% of our tenants told us they’d added rugs to a rented property, 89% changed cushions, 85% have changed light fixtures and 82% have hung up wall art during a tenancy, all popular tricks that allow them to add a personal touch to sparse decor, bare magnolia walls and basic furniture without leaving a trace behind.

Alongside these expected homely changes and cleaning work, many tenants confirmed they’d made larger renovations to their rentals. 79% said they have added extra storage to a rental property, with 51% installing shelves. 43% told us they’d hung a new curtain rail, while many also made changes to the appearance of the walls. 78% had painted a feature wall, 65% a full room and 62% had created a feature wall using wallpaper. Wallpaper has become an increasingly popular choice for many tenants, as options such as temporary wallpaper are a great way to add character to a room and are easy to remove when the tenancy ends.

With current house prices reducing the numbers of first-time buyers and the number of middle-aged renters doubling within the last decade, renting is becoming an increasingly common option for many. From small tweaks to larger renovations, it’s apparent from our survey that the majority of tenants are putting their own money towards renovating properties to varying degrees in order to make their rented house feel like home. With more people renting and renters’ renovations a common occurrence, it seems the nature of letting may be changing to accommodate generation rent. 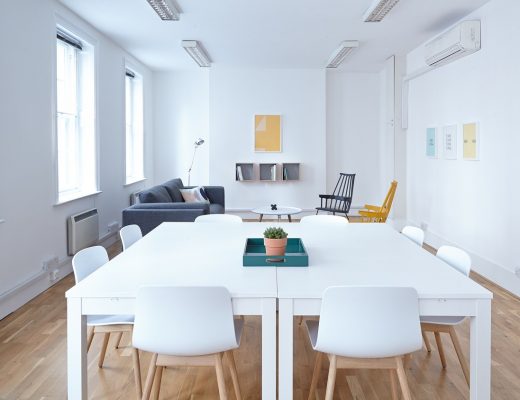 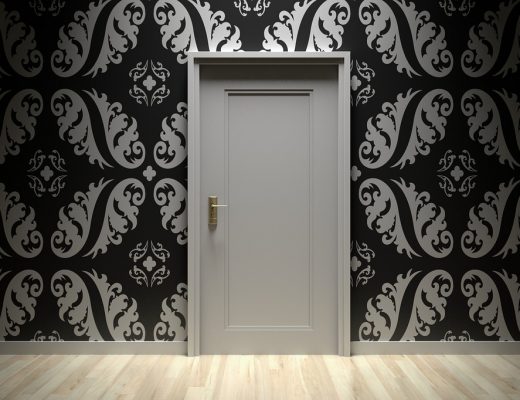 8 Statement Wallpapers to Transform Your Home in 2022 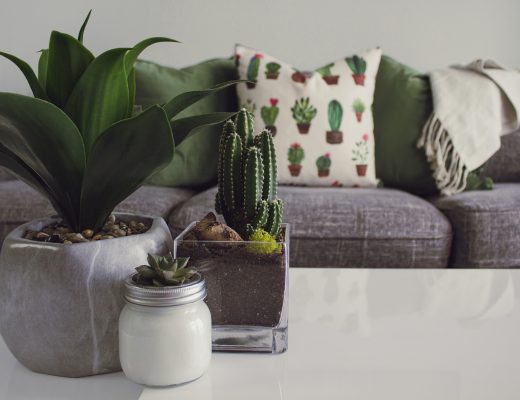 The Latest Wallpaper Trends And Other Home Decor Trends For 2022