Ever wondered what it would look like if your favourite film directors applied the same creative process to decorating as they do to creating their filmic masterpieces? If you have then you’re about to find out. If you haven’t, it couldn’t hurt to find out anyway. We’ve taken it upon ourselves to apply the creative genius of 10 famous film directors to the art of wallpaper design, including cinematic giants like Kubrick, Spielberg and Tarantino.

Through the creation of 10 conceptual room designs we have endeavored to capture the key themes of each director’s most iconic films, with the aim of enabling film fans to instantly recognise whose home it would be with just a glance.

The results? Surprisingly tasteful, actually. Here’s what we think it would look like if film directors decided to swap the director’s’ chair for the papering table:

All work and no play might make Jack a dull boy, but a few rolls of ‘The Shining’ themed wallpaper makes for one heck of an interesting room. If the immersive and symbol-laden director Stanley Kubrick were to try his hand at wallpaper design, we envisage his finished scene would mirror his obsession with symmetry. The intense and mesmerising patterned wallpaper is, of course, paired with a hexagonal carpet design from the set of the Overlook Hotel, complete with that familiar orange, brown and red colourway.

A Kubrick-inspired room would also never be complete without a few finishing mise-en-scène touches from The Shining – Jack’s typewriter and an ominous scrawling of REDRUM on the door perfectly rounds off this chilling yet stylish design.

To recreate a Kubrick inspired design in your home or property you’ll need:

Ridley Scott is known for his uncanny ability to create films with a sensory impact, so we had no doubt that a room designed by Scott would be no different. From derelict spaceships and chest-busting aliens to a dystopian neo-noir vision of a world where man and machine are barely distinguishable, Scott’s movies are laden with immersive sci-fi imagery, mechanical textures and strobing lights.

It’s unsurprising, then, that a Ridley-room would be lined with wallpaper inspired by metal wall panelling, creating a futuristic-yet-retro sci-fi aesthetic reminiscent of Blade Runner. The airlock-style spaceship door is, of course, an unmistakable homage to the futuristic Nostromo ship from Scott’s most celebrated film, Alien. And we reckon no Ridley Scott-inspired room would be complete without a state-of-the-art Voight-Kampff machine, just in case you ever need to double check if you’re a human or a replicant.

Looking to create a futuristic style in your home? You’ll need:

Alfred Hitchcock is well known for his love of Pure Cinema, a form of cinematic storytelling that focuses on the use of strong visuals as opposed to lengthy dialogue. His approach to filmmaking, therefore, lends itself perfectly to his imaginary moonlight career as a wallpaper designer, in which he can fully express his love of creating visual impact.

Hitchcock’s wallpaper would, of course, be designed in classic cinema grayscale to reflect the era in which most of his films were made. It would, perhaps, also feature a hint of the horizontal line patterning that appears in the Saul Bass title sequence of Psycho and as a repeated graphic element throughout the film itself.

And, continuing to run with the Psycho theme, we simply couldn’t resist adding a few finishing touches to the room in the form of Mrs Bates’ creepy rocking chair and a subtle framed bird photograph from one of Hitchcock’s many famous film stills.

4. The Gothic Style of Tim Burton

If ever there was a film director with an unmistakably unique visual style, it’s Tim Burton. Every single one of his films carries his trademark dark colour palette and distinctive gothic styling – the term, we believe, is ‘Burtonesque’ – so it wasn’t difficult to picture what it would look like if Burton was to venture into wallpaper design.

For an artist with a fascination for warped lines and a haunted funhouse aesthetic, our visualisation could only go one way. If Tim Burton designed wallpaper it would, of course, be monochrome, and would most likely feature some variation on a distorted black and white chequered pattern. And, not content with stopping there, we also fashioned him a spiral portal framed by crazy angles to better match the surrealist themes of his films.

Looking to recreate a surrealist design in your home? You’ll need to have a look at:

Wes Anderson is another director known best for his distinctive visual style. Bold colours, striking symmetry and an almost childlike aesthetic are all trademarks of a Wes Anderson masterpiece, which makes this man’s mind a total goldmine for interior design styling.

We think that Anderson would base his designs on the interior of The Royal Tenenbaum’s family home, starting with a vibrant red graphic wallpaper decorated with a zebra-stripe pattern to reflect Margot’s memorable bedroom design. From there we like to think he’d add a touch of rich wood panelling to the walls and doors, plus a smattering of odd-sized gold-framed pictures to complete his familiar aesthetic of symmetrical chaos. One thing’s for sure, any wallpaper and interiors designed by Wes Anderson would be far from ordinary.

Inspired by Wes Anderson’s design choices? Take a look at what you need to create this look yourself:

6. The Jarring Aesthetic of David Lynch

We’ve talked about visually striking films, but now it’s TV’s turn in the spotlight. David Lynch’s mystery horror drama series, Twin Peaks, is still regarded as one of the most visually impactful and unique shows ever made. Once again this provides the perfect base for some seriously good wallpaper designs, and this is how we envisage David Lynch’s creation to look.

Taking inspiration from that unforgettable black and white zig-zag flooring in the Red Room, Lynch’s wallpaper would provide a jarring yet stylish backdrop for any room. Then, to incorporate the series’ ever-present and unsettling soft red tones, we think Lynch would drape his walls and doors with a few deep red curtains – because why not? – and finish the whole thing off with the iconic brown armchair and a classical statue for the full Twin Peaks-inspired aesthetic.

Interested in creating a room which mirrors the decor options of Twin Peaks? You’ll need:

7. George Lucas and the Millenium Falcon

There are few film franchises more iconic than Star Wars; arguably George Lucas’ most powerful cinematic legacy. Lucas challenged the status quo of Hollywood’s tired filmmaking styles, bringing about what some regard as the start of the summer blockbuster mentality. Lucas’ visual style across the entire Star Wars saga pivots on the visual representations of good and evil, light and dark and black and white.

Bright colours are largely absent, but for the contrasting plasma blades of the lightsabers. So when envisioning what a George Lucas wallpaper design would look like, colours took a backseat. Lucas’ sets are designed to be unobtrusive, so we think his wallpaper would be utilitarian, much like the walls of the Millennium Falcon. We couldn’t resist adding a few classic-yet-abstract Star Wars elements into the room, however.

Are you a fan of Star Wars and want to create your very own Star Wars room? Why not try adding the following for an iconic look:

Tarantino is the master of unpredictable, revenge-driven and aesthetically violent cinema. His nonlinear storytelling and vivid visual style keep us gripped from opening to closing credits, and most will agree that his most visually iconic creation has to be Kill Bill. The mere mention of those two short, sharp syllables instantly conjures up visions of yellow and black, so this is, naturally, how we envision the colour scheme of Tarantino’s debut wallpaper creation. He would keep it solid, bold and sleek, with the iconic black stripe bringing the whole wall together both from the top and bottom – the perfect backdrop for a touch of deadly samurai practice.

Looking to create a Tarantino Inspired room? Take a look at what products you’ll need here:

Merging fairy tales and horror is Guillermo del Toro’s bag. His films are characterised by deep, rich colour palettes, religious symbology and otherworldly creatures. Among his most critically acclaimed masterpieces was Pan’s Labyrinth, often described as ‘Alice in Wonderland for grown-ups’ and the inspiration for our del Toro-style wallpaper vision.

His fondness for intricate patterns and the labyrinthine designs of the film lend themselves perfectly to wallpaper design, with our interpretation aiming to capture and combine this theme with the deep, earthy colour palette of the film. The rest of the room is, quite fittingly, dominated by the familiar, haunting woodland undergrowth seen throughout the film.

Interested in creating a space like the end scene in the magical kingdom of Pan’s Labyrinth? You’ll need:

As perhaps the most famous film director in cinematic history, Steven Spielberg is a man who needs no introductions. Regarded by critics as one of the first directors to perfect the use of lighting to create visual texture and ambience, Spielberg has more than a few visual trademarks that make his films.

His mastery of ambient light feeds into our vision of Spielberg-esque wallpaper design, which would be themed around playful lighting effects. The iconic blue and orange lighting colour palette from Close Encounters of The Third Kind forms the base of his wallpaper, with plenty of lens flares and twinkling accents taking up the foreground.

Are you excited by the extra terrestrial? Recreate this look with the following:

Ready to Create a Room Inspired By Your Favourite Film and Directors?

It’s enough to make you wish that these directors really would take a punt at wallpaper design. With so much experience and artistic experimentation to draw inspiration from, who knows what kinds of exciting interior aesthetics they could introduce us to. One thing is for sure, if film directors did do wallpaper it would most definitely set the scene (pun intended) for a whole new genre (again, pun intended) of alternative interior design.

If you have any questions about the wallpaper options we sell, or would like to enquire about stock, please feel free to contact us for more information. 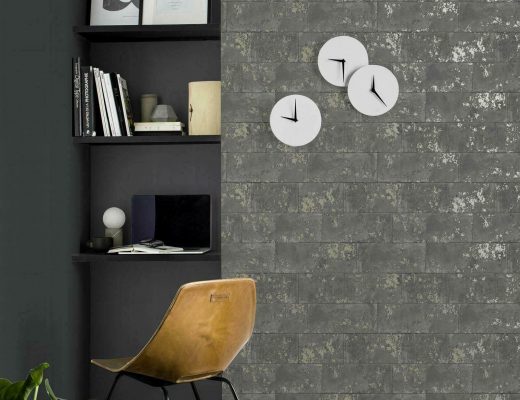 How To Make Dark Wallpaper Work In Your Home 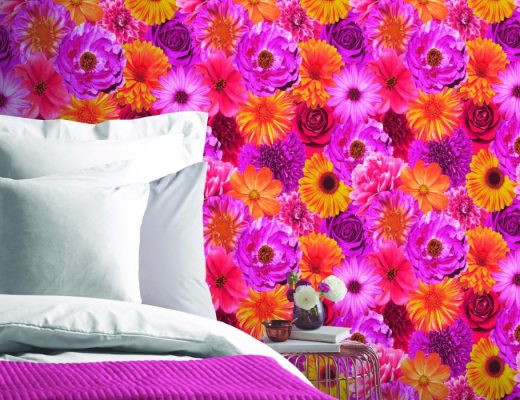 Update Your Home Decor With 10 Of The Best Summer Wallpapers

The Ultimate Guide To Textured Wallpaper